Heavy On The 'Vodka' 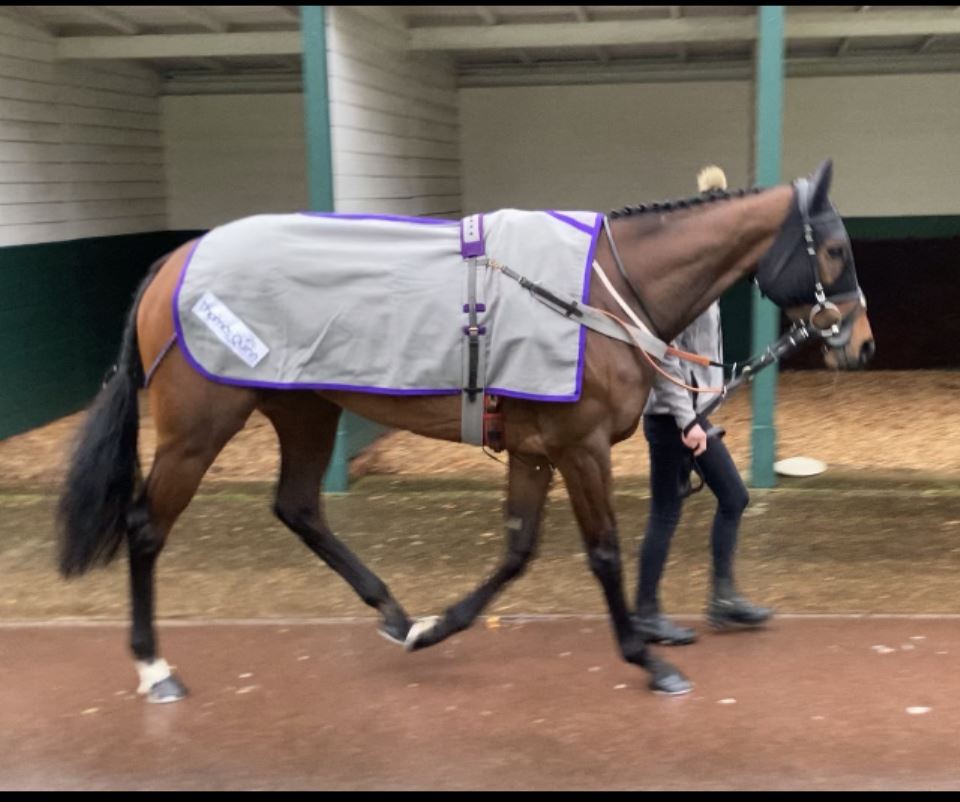 We were still on a break in Cornwall for most of the week - but evrything kept turning, entries, decs, and a couple of horses moving! Monday morning Volkovka got her entry in the Listed Mares Hurdle in Sandown. I kept logging in throughout the morning, and with the presence of some very good mares in that heat, and only a limited number of entries in the concluding 2m handicap on the card, we decided to give her an entry in that as well, and we would wait and see what the opposition looked like in each race, and also pay careful attention to the weather forecast.

Also on Monday - the 3 yr old filly, by Soldier Of Fortune filly that has been in pre training with Jason Maguire moved across to Ravenswell Farm. She has now settled in well, and will be aimed at a mares bumper in the spring. There is just one share remaining in her - she is a quality individual, with a lovely pedigree, being by a sire that is firing in bumper winners on a very regular basis, and out of a half sister to a Galway Plate winner in Royal Rendezvous. Please get in touch if you would like more info on her - or to arrange a time to see her at Fergals. (07909 518902 or email nickbrownracing@gmail.com).

On Tuesday another of our young horses moved from pre training into 'big school'. Tintagel Queen made the trip to Olly Murphys, and has also settled in well. Olly had seen her at the sales, and was really pleased with her when she arrived withn him. Jason Maguire had done a great job with both fillies, and they head on to the next stage of their careers in fantastic shape, and with all the tools to do the very best that they can. I will be in touch in the next couple of weeks regarding a stable visit to Warren Chase to see her at exercise. Wednesday Classic Ben got his second entry of the season - back at Exeter, a track that seems to suit his running style. He had a very long, and careful prep for his seasonal debut, will undoubtably improve for that, and we are all looking forward to seeing him out again.

On Thursday morning we headed home from Cornwall, Fergal called to say that he and Paddy thoiught that the handicap was looking like the better option for Volkovka so she was declared in that instead of the mares Listed hurdle. Peter Kavanagh, who has really clicked with the mare is currently out injured, so Paddy would be back on board. The forecast rain also meant that the 2m trip was probably better for her.

Friday was spent organising entry to Sandown for the vast majority of The Tyringham Partnership who were heading there to see Volkovka - Sandown are a great track to deal with! I also had a lot of paperwork to send out to new NBR members - it has been a very busy week - with lots of new members, and lots of interest in the very limited number of shares we have left. Availability is so thin on the ground now, we really just have a couple of shares left in all of the horses - so we are looking to bring another young horse onto the team very shortly. There will also be news shortly on the flat syndicate that we are putting together - we already have names down for that!

Saturday we headed to Sandown - Volkovka looked in great shape, and her large group of owners were set in for a good day! The car parks were very wet, and infact were flooded in the morning, so we knew before we got through the gates that the ground would be very testing. Further rain throughout the day meant that it just got deeper, and it seemd like the switch back to 2m for her was a good call. In the race itself, Volkovka settled very well, she jumped and travelled great, and approaching 2 out Paddy thought he had the race won, only for her to falter and lose tabs on the front 4. She just seemed to not be able to pick up on the ultra deep ground, and will not be running on that again - she handles soft well, but that was something else yesterday - we have been there with plenty of soft ground horses, but I have never seen it like that before. Volkovka is fine this morning. Classic Ben has been declared for Exeter on Tuesday - Ciaran will ride as usual.

A round up of all the other horses in the team. Sadly Go Millie Go is still lame after her disappointing run in Kempton over Christmas - she has been thoroughly checked over by the vet, and has had her stifle medicated. Auditoria has had her flu vac after her Catterick win, and she is on the way back after a few days off work. She will be out again later this month/early Feb. 'Betty' now has a name - she has been named Sunset Melody and is another that is back in ful swing after an enforced break. I can't wait to see her on the track - her syndicate is made up of lots of people new to racehorse ownership, and they are a really enthusiastic bunch! Mamoon Star is fine ater his superb third in Cheltenham last weekend. After chatting to Fergal this week, he is likely to be out again in early Feb, and although he looks sure to pick up an ordinary bumper, he will probably stick to pattern company for the rest of his bumper season. Yauthym is back on song, and will be out again in about a month. The recent weather and ground would have precluded her from running anyway - so her enforced break with an infection will not be the end of the world. Blue Bikini is fine after her outing last week in Taunton. Connor Brace rode her in her exercise yesterday, and she showed no ill effects from the run. She will now step up in trip, and probably into handicap company.

Hidden Beauty is in fine form, and her bumper form was franked last week - a fact not missed by plenty of her syndicate members! Last month we had decided on a plan to run her at the Dublin Racing Festival in February, but those plans look likely to change - we talked over Christmas, and the ground in Lepoardstown was a factor that kept coming up. Last week both Willie Mullins and Gordon Elliott came out in the press to state their concerns about the ground there as well, so we have decided to change tack slightly, and although we will keep an eye on Dublin, she is more likely to stay this side of the Irish Sea. Sandown in March is her ultimate aim, but she will have a run before that.

Queenohearts is still on track to return this month. She has been away to school over poles with Laura Collett, and has also worked very well on the back of the hill gallop in Lambourn. On Saturday she schooled very very well under Ciaran on the rain softened ground at Thorndale Farm - everyone was very impressed with her. This week she will have another away day, which should put her spot on for her first target day. She is being primed for a run on the big day in Lingfield on their Winter Million card. There is a 2m4f Mares Novices Handicap Chase worth a cool £45,000 that looks perfect for her, and a Novices Chase over 3 miles that she could well get an entry in as well if it looks like her 7lb mares allowance could be a handy pull. Fingers crossed she gets there in one piece!